The Ida Burn is running shallow, the interstitial spaces between pebbles and stones dense with silt, and in the glides a yellow sheen of flowering broom. The wind that whooshed in the trees all morning has quietened to the sound of faraway surf. There’s just birdsong, and the tinkling of water over stones.

On a day of torrential rain several years ago, tips of waves surged through the broom bushes, powering the Ida Burn closer and closer to the house. The cane armchair I’d left by the pond bobbed and sailed across the paddock, negotiating fences in the tumbling mud-coloured surge.

In the drought three summers back, the Ida Burn disappeared. Grandchildren ran up the dry creek bed, their bare feet flicking over boulders. The springs in the front paddock dried up, the first time in over 50 years, the neighbour told me. The paddocks all the way to the hills crisped and turned gold, the Perendale sheep a dusty grey.

Rain, and lack of it, makes water a defining aspect of life here in Central Otago. Yet water is not the only problem we face, nor is it independent of any other facet of life – the soil, the nutrients, the microbes, the air we breathe. Looking up from water there is the whole environmental, economic, and ethical crisis our society is facing.

“We stand where two roads diverge,” Rachel Carson wrote in Silent Spring, 1963. “But unlike the roads in Robert Frost’s familiar poem, they are not equally fair. The road we have long been travelling is deceptively easy, a smooth superhighway on which we progress with great speed, but at its end lies disaster.”

She was talking about the chemical highway of toxic pesticides, fungicides and herbicides, and the lesser-known road of alternative, biological systems. But she could have been talking about us today, with our highway of intensive industrialised agriculture, our heating, chaotic planet, and the hope that is offered by visionary practitioners and scientists. My wish for New Zealand? That we have the courage to take that other road to transform our industrial agricultural systems into plant-based and organic. 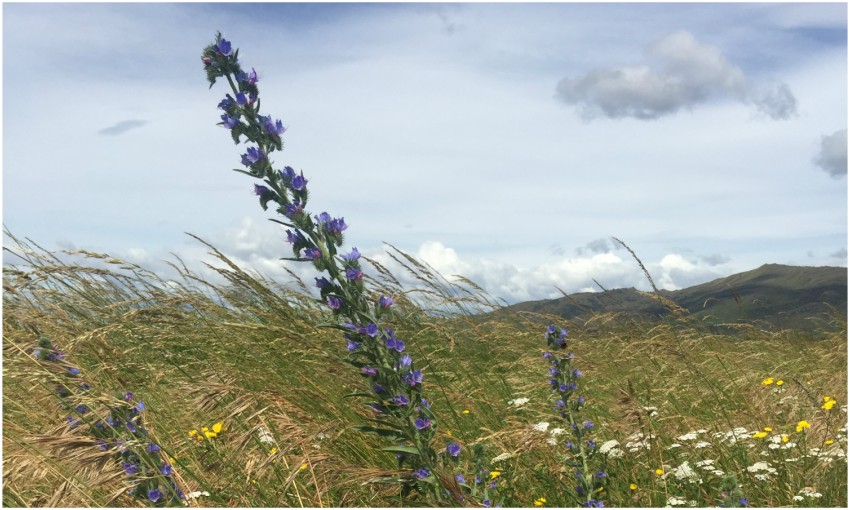 I was 22 when I first read Silent Spring and came to believe in the justness of organic practice. We were living in a bus at the time, in Omokoroa, in the heart of the kiwifruit industry. People called my husband, who worked on an orchard, that “Vogel bread-eating, cheesecloth shirt-wearing hippie”. I’m not sure what I was called. During the afternoons when our toddler daughter slept, I tucked my legs beneath me on the couch in the bus and read about the sagebrush lands of the high western plains in America. A land of harsh extremes of climate, of blizzard and drought. The land evolved to support grouse and antelope, moose and willow and beaver, lake and trout. When the millions of acres of sagebrush lands were sprayed to grow grass for cattle, ecosystems collapsed. The wild animals disappeared, the beavers and their dams, the lake and trout, the streams. I think of that now. Central Otago has lost over a million acres of tussock lands. The desertification of the area has been described as “one of the most dramatic examples of land degradation to have resulted from European expansion overseas during the nineteenth century.” A.S. Mather. (What would he think now of the greening?)

My wish is for the remaining tussock lands to be saved. My wish is for the peaceful animals we base our economy on to live out their lives and not be replaced. My wish is that the tawny hills are left to grow the grey-leafed divaricating shrubs that conserve water and hold carbon as well as protect lizards, small birds, and insects, all that ecology we may not recognise or understand, but which interacts in our lives.

My wish is for clear water in the Ida Burn, that singing stream beyond the willows. 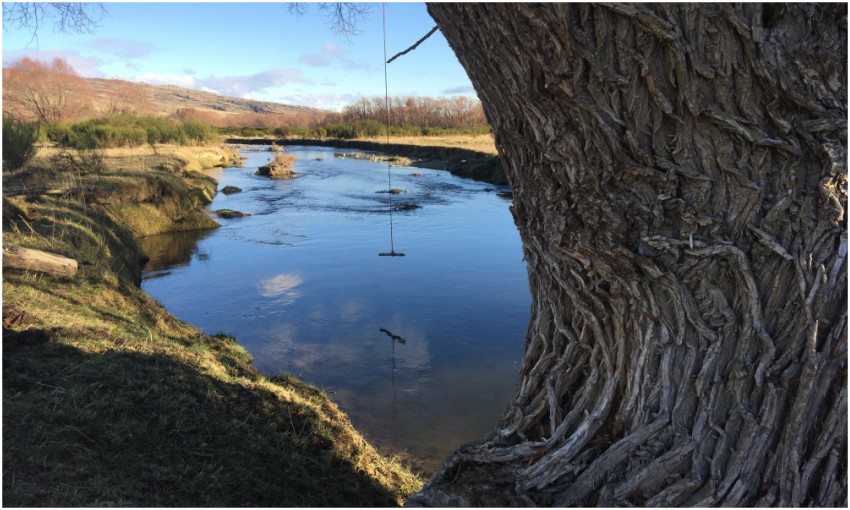 I was 61 when I became a vegan. Not the least because some of my children and grandchildren are vegan, or that I was brought up with a vegetarian father, or that I fundamentally believed it was the right way to go for the sake of our planet and our fellow creatures. I’d wanted to change for seven years but I didn’t want to give up anything.

It was easy to cook with meat. I liked cheese, and cake with whipped cream. In the end it was a momentary heart connection, courtesy of Facebook: a video of a sheep struggling to run back from the Hades of the slaughterhouse. Despite his terror, the outcome was unavoidable. OK, that’s it, I said to myself. And for me it was over, whipped cream included.

My father was nine, in 1938, when he said no. No hyper-reality then. It was a school trip to the Waingawa freezing works to see how a pig was killed, struggling and in front of their shocked faces. My father and his twin brother went home and declared they would never eat meat again.

My grandmother, instead of serving them mutton or beef, boiled up an extra tin of Watties peas each night and divided it between the two boys. She may not have known about the fullness of pea proteins, or how they would become the basis and hope of fledgling plant-based industries.

The boys thrived, became national gymnastic champions, represented the Wairarapa in seven different sports. My Uncle Ken, now 92, said to me recently, “Do you know what the world needs to survive? It needs to stop burning fossil fuels and stop eating animals.”

It is as simple as that. And science bears him out.

“A global shift towards a vegan diet is vital to save the world from hunger, fuel poverty and the worst impacts of climate change” – United Nations Environment Programme 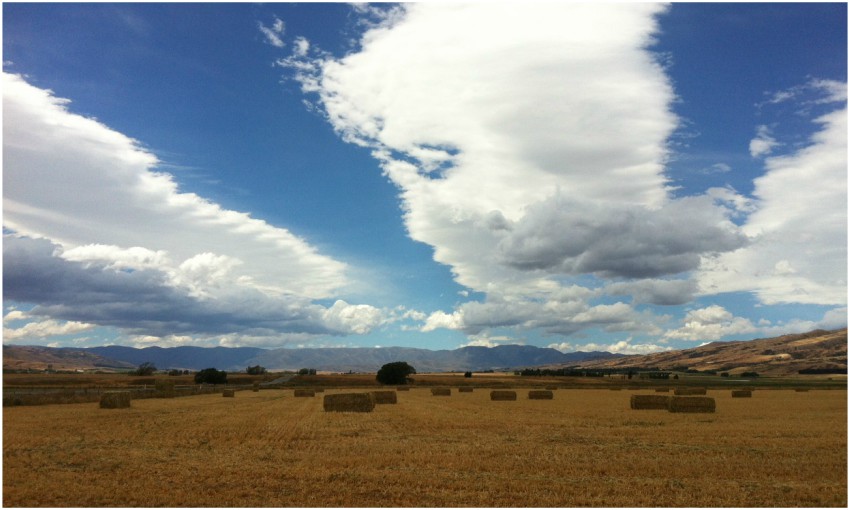 Each day I sit outside and write the weather and the land. Watching the weather, I learn the constancy of the earth. The flux and the bounty. How it is not ours to rule but that all of us are caught in the same wheel of lightness and dark.

In the morning, horizontal snow, then small tornadoes of white powder scuffed and rising in the air.

Relentless wind, the outdoor chairs blown over, the birds tossed about.

Sheep graze on Rough Ridge amongst the bright broom and the briar rose beginning its flush of pink.

Late November, and frost. The yarrow crackles to walk over it. All the potatoes have burnt off, the newly planted dwarf beans and the grapevine with its feathery shoots, limp and brown.

A blackbird flaps by, folds its wings close, sails in a straight line, then flaps again, the air still and conducive to flight.

Evening, the sun low and lighting the Hawkduns with a tawny brightness. Everything revealed, nothing held back. A hawk, its wings lit up a golden brown, turns and turns, searching the grass below.

Sky full of low grey cloud. The Hawkduns and Mt Ida disappeared. Blackstone Hill smudged with mist as if behind smoke.

Wind so strong the chimes bang on the line and the air pours across the grass like water. Perhaps my pea-serving grandmother was intuitively right. In 2019, Larissa Zimberoff wrote an article for Time Magazine, ‘The Rise of the Pea: How an Unassuming Legume Emerged as a Frontrunner in the Race to Replace Meat and Dairy’. She tells how Canada is investing over half a billion dollars into research and production facilities for pea protein.

There’s excitement, too, about the development of alfalfa (lucerne) as a protein source. Good news for Central Otago, where lucerne flourishes. Here, in the hottest and coldest valley in the country, we are surrounded by fields of purple flowering plants. Lucerne is mostly used as an animal feed in New Zealand, yet its essential amino acids profile, a 2018 MPI report says, is very similar to that of soy. Alfalfa protein is attracting interest in the US and elsewhere.

I am filled with hope. It is so simple what we as consumers can do: ask for plant milk in our coffee (like NZ-made oat milk), buy a NZ-made pea protein meat replacement. Stir fry chickpeas with Mexican spices, add hummus. Whip the cooking liquid from chickpeas (aquafaba) and sweeten it for cream. What the government and the landowners need is more complex:  financial support to change what needs to change. Education, mentoring, inspiration, science, technology. Production facilities. Earth.

I wish I could write about one animal, a calf say, in such a way that a reader could feel the connection with another living being. I have two rescue cows coming to live here, but they haven’t arrived yet. I don’t know their warm breath, their wide-apart eyes, their slim fetlocks and tufted tails, or if they sigh or not when they sink into the long, tangled grass. How wide will the sky look to them here? The air fragrant with mown lucerne, and under their ribs and hip bones, the ground still soft from spring.

In praise of bananas, the greatest fruit of them all