The Swimmers author Chloe Lane interviews Zina Swanson, whose paintings are inspired by old and outlandish books about botany.

December 1990, my family and I stayed with my aunty and uncle in the Christchurch suburb of Mount Pleasant. I remember the summer mostly hazily – picnics, swims, long hot days – though I also have specific memories. Buying a new sleeping bag; Batman-themed gifts including a torch with “bat signal” accessory; the volume of prickly Onehunga weed on my aunty and uncle’s lawn. It was impossible to take a step on that grass without my young, soft feet getting hooked by a fistful of prickles.

Earlier this year when my family relocated to Christchurch, we visited my aunty and uncle who live at the same address but – post-2011 earthquake – in a different house. Entering the new house felt a bit like visiting the old house in a dream – familiar but destabilising. My son immediately wanted to play on the lawn, and before I could retrieve his shoes from the entranceway, he stepped off the deck and onto the grass. As he did, I flinched. Though three decades had passed and the Onehunga weed was long gone, I had a muscle memory of being repelled by that surface – of the small pain I had experienced the summer I was eight. Unawares, I had created my own little personal history with this patch of grass. 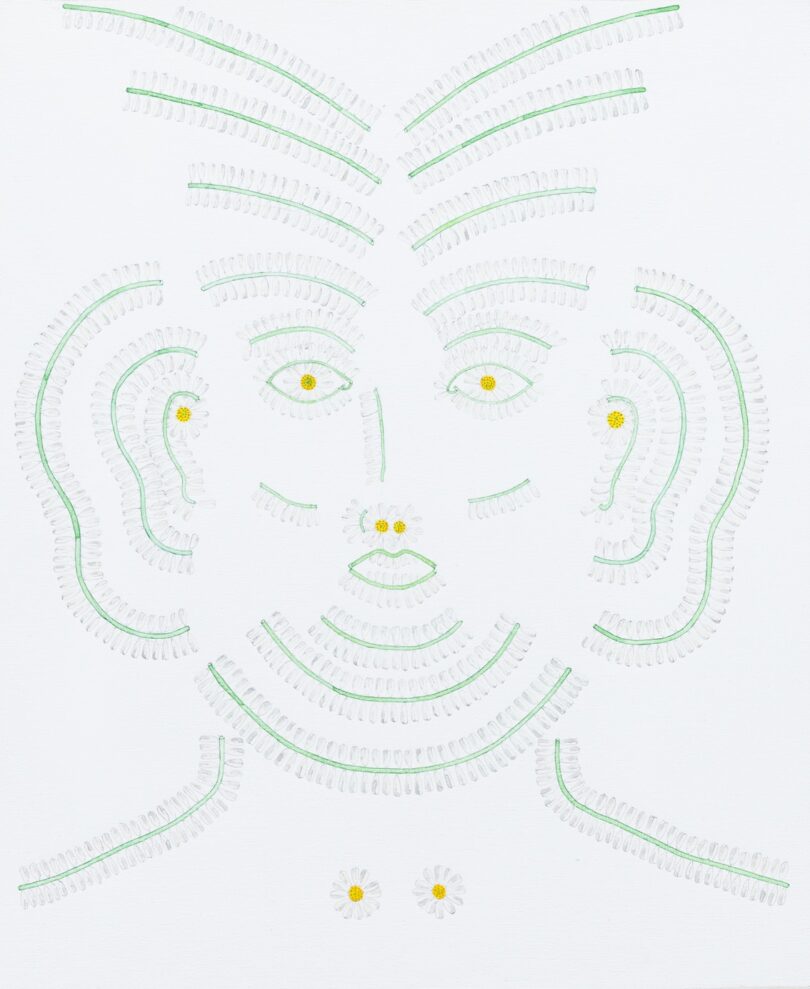 Christchurch-based artist Zina Swanson is interested in how we live with plants, and the memories and personal folklore we build around certain plants in order to better understand them. The huge rambling villa Swanson shares with artist partner James Oram and studio-assistant cat Mo has a large, enthusiastic garden that was planted over 40 years ago by the property’s owner. Swanson lists the plants she can see from her second-storey studio window: “Cabbage trees, the top of a huge camellia, a feijoa, a beautiful variegated elm that keeps our studios cool in summer. I definitely feel like my most recent body of work is very much about this garden.”

The work she refers to is on display at Sumer, Tauranga in a solo exhibition titled Any Plant Thought of Too Much Will Not Thrive. The saying is taken from Animal and Plant Lore (1899), a collection of oral English language histories that Swanson has had on near-permanent renewal from the University of Canterbury Library, where she works part-time. The book provides the basis for many pieces in the show. Plant lore, which has no scientific founding, has given Swanson a fresh way to consider how we make sense of the world around us. The result is a collection of exquisitely rendered watercolour and acrylic paintings – though pressed flowers and grass also feature – that while uncanny and humorous, also hint at a darker view of humanity’s relationship to the natural world.

“Through making the works I establish new memories and stories about the specific plants,” Swanson says. “Most of the time I am killing them – pulling them out, pressing them, trying to keep them in a state that makes them look seemingly alive, presenting them as a sort of relic of a collection process. I made a work decades ago that involved the collection of hundreds of rose thorns. It wasn’t until years later that I found out that rose thorns don’t grow back, but leave the plants more vulnerable to disease and infection.”

In the painting titled Tiger lily with nose border (Smelling tiger lilies causes freckles) (2020) – another phrase from Animal and Plant Lore – two walls of freckled noses appear to close in on a blooming tiger lily. It’s initially odd, amusing. Swanson often uses repetition to this end. Though take a step back from the work, and the noses collectively could be mistaken for wasp nests – the image turning unsettling. “I’m drawn to these lore for a number of reasons,” Swanson says. “The absurdity, the futility and the beauty of their impossible possibility. In another sense it’s the thought of ‘imagine if’. Imagine if you did get freckles if you smelled a tiger lily?”

I want to take this question as if Swanson were a pre-Enlightenment scientist out to prove these impossibilities as real. Some of how she works mirrors that of fieldwork – she collects, arranges, records, repeats. Many of her works require an almost obsessive attention to detail, as in Forget me not (2019), a silhouette of a head composed of many pressed forget-me-not flowers. “Certain plants keep cropping up again and again in my work,” Swanson says. “Daisies for example. I made a work for The Physics Room in 2009 which was a very, very long pressed daisy chain held up on intermittently placed glass supports. I had a certain spot down by the Avon River that was full of daisies. I would go there every morning to collect them, then take them back to the studio to press. On several occasions I raced to get there before the council worker arrived on a ride-on mower.”

Swanson has an ongoing interest in Peter Tompkins and Christopher Bird’s infamous The Secret Life of Plants (1973), which makes pseudoscientific claims about plant sentience. Chapter headings include “Plants can read your mind” and “The mystery of plant and human auras.” After presenting an argument for the book’s validity, the introduction concludes: “There are sceptics who find it hard to believe that plants may at last be the bridesmaids at a marriage of physics and metaphysics … Evidence now supports the vision of the poet and the philosopher that plants are living, breathing, communicating creatures, endowed with personality and the attributes of soul.”

Unsurprisingly, at the time of its publication there was backlash from the scientific community. Swanson found this and Stop Talking to Your Plants and Listen (1977) by Elvin McDonald, a holistic how-to guide of home plant care, at the same book fair. She was initially drawn to the covers of both, but “was completely all in” once she began reading The Secret Life of Plants. The chapter that initially hooked Swanson is titled “Plants and extrasensory perception” in which Cleve Backster, a lie-detector specialist for the CIA, attaches his Dracaena plant to a polygraph instrument in order to solve a “murder”. In the experiment, a plant “witnessed” one of Backster’s polygraph students “murdering” a second plant. Then when the line-up of students was presented to the plant witness, only when the actual culprit approached did the witness plant’s polygraph meter “go wild”. Swanson also has a copy of Backster’s book, Primary Perception: Biocommunication with Plants, Living Foods, and Human Cells (2003), which explores this experiment in more detail. A Mimosa experiment from Plant Autographs and Their Revelations; Swanson’s Idris Window with Geranium (Geraniums growing in an open window will prevent flies from entering the room), 2020, acrylic and gesso on canvas (Photos: Supplied)

Plant Autographs and Their Revelations (1927), by biologist, physicist, botanist and early writer of science fiction Jagadish Chandra Bose is another text of interest. Here Bose details a series of experiments with Mimosa pudica, commonly known as shameplant because when the leaves of the plant are touched they fold into themselves in a kind of embarrassment. “Bose covered glass plates in soot and attached a thread to the plant,” Swanson explains. “When exposed to electric shocks the plant’s movement created what Bose called a ‘response curve’, the thread leaving sort of brush marks in the soot. There were a number of other experiments using this same apparatus but introducing other stimuli such as anaesthetics or ‘the effect of a passing cloud.’”

What Swanson has in common with these “pioneers” of plant research is an inquisitiveness bordering on suspicion in the beauty, complexity, and potential of plants. It is an extraordinary privilege to visit an artist in their studio – to be allowed a peek behind the curtain – yet often I find there is a gap between the finished works and the odd, everyday practice of making. I am reminded of a winter I visited my brother in Virginia, USA where he was working on a PhD in marine biology. While his colleagues were away over the Christmas break my brother was taking care of their … things. I found myself both mesmerised and bamboozled by the slippage between what they presented in scientific journals versus what they did in their labs, how they organised their personal spaces, their pets, and whatever those things were that were growing in the jars in their bedrooms.

“I recently asked my landlady to please not mow the lawns until I finish pressing enough grass for the grass/glass frieze/skirting board I am making for Sumer,” Swanson says. “Sometimes it’s like I am standing outside myself watching as I collect thousands of daisies, press thousands of forget me nots or crouching down and meticulously cutting grass with scissors and I wonder ‘How did I end up here again?’” Imagined wood with leaf flames (Burn wood, and the flames will form themselves into the shapes of the leaves of the trees from which the wood came), 2020, watercolour on canvas / Plants from the sale table, 2016, mixed media

Swanson tells a story of buying plants for a work titled Plants from the sale table (2016) that originally showed at Christchurch’s Centre of Contemporary Art. As she filled her trolley at The Warehouse with these near-dead specimens marked down to $1 or 50c, other shoppers started to take notice, to watch her warily, as if she knew something about these sad, rejected plants. Swanson’s paintings leave me equally curious and uneasy: she knows something, is trying to tell me something. But am I getting it?

Animal and Plant Lore doesn’t have any listings for Onehunga weed, so I asked my mum if she could recall any lore related to this plant. “No,” she told me, “but if you transplant a parsley plant it brings bad luck. And some even say the daughter will become pregnant. I remember that one from way back. Also to be ‘in the need of parsley’ is to be on the verge of death.”

“So is it not actually about plants?” Swanson says about her exhibition. “It’s about people and how we seem intent to force our own narratives onto everything, onto plants. To give them histories that are tied up with our own lives and stories.” To this end, her paintings always have a human presence – the outline of a face, noses, a hand – or something that suggests a human has been here: a window, or neatly arranged sticks as in the unnerving watercolour on canvas Imagined wood with leaf flames (Burn wood, and the flames will form themselves into the shapes of the leaves of the trees from which the wood came) (2020).

These works are small – scaled for an interaction with the viewer that is personal, intimate. They could almost be enlarged illustrated plates from the books they reference. And in this way they ask us to carefully and patiently examine our relationship to the natural world, with Swanson as our guide.

Zina Swanson’s solo exhibition Any Plant Thought of Too Much Will Not Thrive is showing at Sumer, Tauranga until 19 December 2020.

She is represented by Sumer, Tauranga and Jonathan Smart Gallery, Christchurch.