Waitomo is a town built on tourism. But as overseas visitors who have been flocking to its spectacular network of glow-worm caves for over a century dry up, the future looks uncertain.

More than 130 years ago, the eruption of Mount Tarawera killed an estimated 153 people and buried Te Otukapuarangi and Te Tarata, the world-famous pink and white terraces. It was a devastating blow to the families of those lost, and to the Māori settlements destroyed by pyroclastic surges and falling debris. One, Te Wairoa, remains as a tourist attraction; a reminder of the damage nature can wreak.

At the time, a trip from Europe to New Zealand could take three months. When the mountain erupted, there was no turning back for those who’d planned to spend half a year on a voyage to the eighth wonder of the world. Tourism operators needed to redirect the surges of wealthy pseudo-explorers looking for geological thrills, and eventually they found the perfect one: Waitomo.

The local hapū had known about the cave network, found between Te Kūiti and Ōtorohanga in the King Country, for centuries, using part of it as an urupā. It was Tāne Tinorau who first found the saw the jaw-dropping sight of glow worms amid netherworldly stalactite chambers and realised he had an opportunity on his hands. By 1889 he was leading tourists through the network; in 1989, Treaty land settlements returned the caves to his descendants. A tourism brochure for Waitomo from 1928; and the Queen and Prince Philip visit the caves in 1954 (Photos: Jim Heimann Collection/Getty Images; PA Images via Getty Images)

These descendants, and other members of the Ruapuha Uekaha Hapū Trust, lease the caves to Tourism Holdings (THL) for operation. Last week, THL announced 140 job losses across the Waitomo Group and Kiwi Experience businesses, gutting the town’s income. This decision came after the devastating impact of Covid-19 on tourism in New Zealand.

“There are about 300-odd people living in the Waitomo area, and at least half of them are in some way involved in tourism, so [Covid-19] has seriously affected what goes on here,” said Angus Stubbs of The Legendary Blackwater Rafting Co. He spends large portions of his time in the Ruakuri caves, and knows them like the back of his hand.

Over the past couple of weekends Ruakuri has opened for limited tour groups. The narrow subterranean walk makes physical distancing difficult, so Stubbs and his fellow tour guides employ the “Covid hello” when they pass anyone: they turn and face the cave wall, shuffling past each other back to back.

When Ruakuri reopened two weeks ago, international tourists still made up many of the customers. There are 50,000 of them still in New Zealand post-lockdown, who stayed because they’d been unable, or unwilling, to get out. Stubbs, a geologist, estimates about 15% of the business is domestic tourism. “That’s what we’re reopening with,” he said. “Before lockdown, we had four pubs going off every night. You get two or three thousand people turning up each day.”

Some of these thousands were workers; in the caves, at adventure tourism business the Lost World, or in the bars and cafes of Waitomo, Ōtorohanga, and Te Kuiti. Stubbs said they were mostly young, and often on work visas. Although the wage subsidy had helped, many had left anyway. Some for their home countries, and others for kiwifruit orchards in the Bay of Plenty.

Those who left New Zealand did so quickly, sometimes with as little as four hours’ notice. “We have sheds full of people’s stuff [they left behind] here,” said Stubbs’s daughter, Pippin. “There’s even a car.”

These job losses will heavily impact the town’s raison d’être. THL chief executive Grant Webster said the business was operating at 5% capacity. The motels are largely vacant, and the pubs are closed. Waitomo’s economy is based on the ecology of the caves. “Our whole business in Waitomo is keeping glow worms alive. If they die, our children starve,” said Stubbs.

Piki Knap, interim manager of the Trust, said the company had a huge amount of sympathy for those affected by the job losses, many of whom were members of the hapū. “No-one in our lifetime has had to deal with a situation like this,” she said.

While the cost to those who run the caves is heavy, the job losses have an impact more than human; the caves rely on funding to stay in perfect condition. Physical distancing ain’t easy underground (this is in 2011, well before the Covid era) (Photo: Lisa Wiltse/Corbis via Getty Images)

Waitomo is one of the most intense conservation projects in the country. The caves’ environmental team measures wind speed, wind direction and carbon dioxide levels constantly; even throughout lockdown. If too many people walk through breathing carbon dioxide, the stalactites in the caves could start dissolving.

There are air-locked doors, humidified chambers, and environmentalists and entomologists hired explicitly to study the glow worms. “It’s all about our kaitiakitanga, right?” Stubbs said.

Farmers – the only other source of income in the area – are also tied to the conservation project. The cave businesses and the Department of Conservation work together to fund the cave work, and so farmers nearby get funding and pairs of hands to plant along their riverbanks.

Lorraine Fox, a dairy farmer about 30 minutes’ drive north of Waitomo, has no caves on her property; but there is a river. “We have a river running through our property that is fully fenced, and drains are also fenced,” said Fox. “The riparian plants that we access are through Waikato Regional Council who offers them at a reduced rate for [cave water protection].”

It’s not uncommon for farms in the Waitomo and Ōtorohanga region to double as B&Bs for tourists and guest houses for cave guides. In the future, the farms themselves may become the area’s new drawcard. 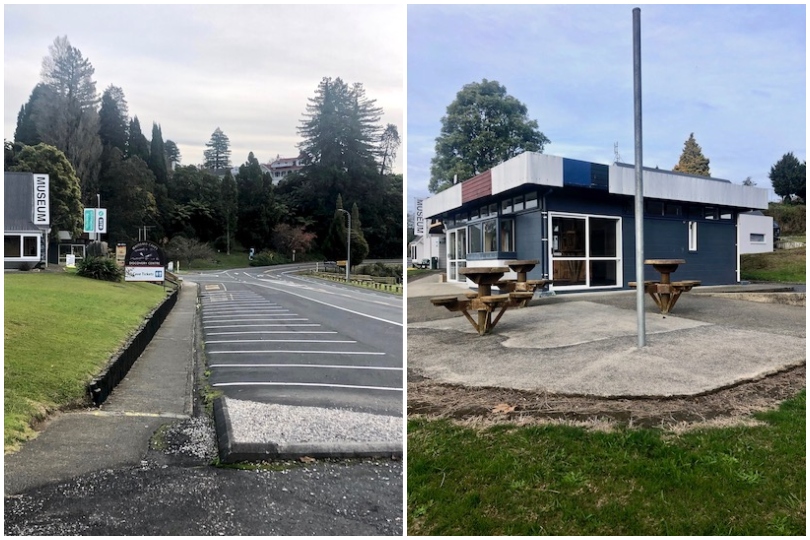 Andy Rawles has worked at Huhu Cafe for 12 years, first as a chef and now as an owner. Huhu is well-known and well-loved in the area – even visited by Katy Perry at one point – but it was shut up until last Friday.

They didn’t open for takeaways at level two because the general store was already open. “We didn’t want to be competing,” said Rawles. “There’s about 30 people that live in the village here.”

Thankfully, Rawles and his wife own a cafe in Te Kūiti, too, which gets more traffic. He’s been there almost every day. “It’s the first time [Huhu] has been shut for this long,” he said. “Those last few days were pretty grim. There wasn’t much point in being here.”

The last few years have been heavy with international tourism, but Rawles remembers a time when the domestic market was lucrative. “Eight years ago it would have been 70% locals,” he said. “But in the summer, now, it’s about 90% international.”

Like Stubbs, he’s seen staff naturally drop away. “We haven’t had any big talks about redundancies yet,” he said. The way he sees it, the easy bit is done; the bit with wage subsidies, the natural winter crew reduction, and the fact that everyone was in the same boat.

“I think it’s going to be harder decisions [moving forward],” he said. “[Recovery] will take until summertime, or longer.” An ash layer is visible towards the exit of Ruakuri, indicating an eruption around 1.2 million years ago. Moa bones are found on the banks of the cave river, washed in from outside. A sign is hammered into a rock 80 metres under the ground to warn us that by entering the Ghost Passage we’re trespassing into land owned by the Holden family. Over a pool of water in which Andy Serkis practised being Gollum, ancient stalactites dangle on the edge of shattering.

“The general feeling is that we’ve seen it all before,” said Stubbs. Most of our thought processes are short term, but in Waitomo there’s a grander scheme. Tāne Tinerau’s descendants, in their time guiding tourists through the caves, have seen swine flu, two world wars, and the polio epidemic.

“We have been here for hundreds of years and we will continue to be for hundreds more,” said Knap. “Our people are resilient, and we are confident we will get through this tough time.”

Just over 26,000 years ago, Lake Taupō was formed by the largest volcanic eruption in world history. The lava and debris killed animals and plants alike, and the ash travelled across international waters. Deep inside Ruakuri, the glow worms kept on shining. Protected by their limestone walls, the hapū, and geologists like Stubbs, they’ve weathered volcanic eruptions, economic recessions and pandemics. They will survive the tourist drought in Waitomo; whether anyone else does will take longer to know.

This story has been updated to include a statement from Piki Knap, interim trust manager of the Ruapuha Uekaha Hapū Trust.