This morning, an hour after news of a Real Housewives racism scandal broke, Duncan Greive spoke with Michelle Blanchard on the phone from the US about the episode.

“This flat champagne, it’s driving me nuts,” says Michelle Blanchard, from an airline lounge in New York. She’s drinking in the afternoon, an hour away from boarding a flight to London, because her Real Housewives lifestyle is not just for television.

She’s also supremely composed despite the fact that at home in New Zealand news just broke that next week’s episode of The Real Housewives of Auckland features her being referred to as a “boat n*****” by Julia Sloane, another cast member on the show. The moment happens early in the episode, and its immediate aftermath and lingering effects echo for 42 minutes. Sloane scrambles to evade responsibility throughout, while Blanchard, save for a brief and very understandable eruption, is mostly a picture of poise under extreme pressure.

When I saw the episode on Friday, I immediately wanted to speak with her. The episode is shockingly powerful for any number of reasons, but most of them lead back to how Blanchard absorbs the comment and its implications. We spoke for 15 minutes an hour after the Herald on Sunday broke the story, and below is a lightly edited transcript of that conversation. Also, in case you were worrying, she got her champagne replaced.

Duncan Greive: The main quote the Herald on Sunday has to hang their story on is Michael Lorimer, Julia’s husband, saying that it’s an old boating term they use in a joking way. And that the production was irresponsible for including it.

He essentially says that because it initially happened off camera they should have just let it be, as if that were even possible. The thesis seems to be that they’re the victims in this thing. Still.

You’ve got to be shitting me! See this is the problem – she just doesn’t want to own what has come out of her mouth. I have no problem with Julia – I want to make that clear. We have a professional working relationship. However, she said it. It came out of her mouth. So she needs to own it. Don’t blame it on anybody else or make it out to be a lighthearted comment that you jokingly use, because you know what? It is not a lighthearted comment. It’s an offensive comment.

I know a lot of boating people, and they do not use that term. Most of them haven’t even heard of it. And those that had considered it a highly inappropriate comment to make.

Put it this way: Michael should come down to Harlem or Brooklyn, where I’ve just been, and stand there with a sign saying “Boat N*****s needed for a hand on a boat”. See how long he could stand there without getting shot.

Going back to the moment, can you tell me about your instinctive reaction upon hearing her say it?

I was shocked. I was just absolutely shocked. I couldn’t believe what I was hearing. It took a while to sink in. Just to clarify – there is an issue around ‘boat’ and ‘house’. I heard ‘house’ to start with. Then later she corrected me to make it clear that she said ‘boat’. We had that issue going. It’s just knowing what ‘house’ means – that’s just majorly insulting.

There’s a huge difference. ‘Boat’ is more acceptable, I guess. However you still have the ‘N word’ in the content. So I just don’t know how that makes it acceptable.

I think the way she clings to the idea that ‘boat’ is more acceptable is shocking and instructive in and of itself. It seemed to hit you in two waves. There’s the initial reaction when you’re sitting alongside her, then the true gravity of it, and what it implies about the way she perceives you sinks in.

I can’t explain it, but I also felt like I had to be the spokesperson for ‘what to do when you’ve been called the N word’. I don’t like being in that position – you know what I mean? Because there’s not a right or a wrong way to react to it. Some people will say I did the right thing, others will say I overreacted. But what do you do when someone throws that word at you?

I think it’s an incredibly powerful piece of television for precisely that reason: because you – and Gilda, Julia, everyone – are figuring out what it means and how to respond on the fly, in real time. And it’s from there that it derives its power.

And just bearing in mind, when I was sitting upstairs with Gilda, and I was saying I didn’t want to see her I was discussing something. When she came and corrected me to say ‘oh no, I didn’t say ‘house’, I said ‘boat’.’ That infuriated me. I just saw red at that point. I thought ‘do not try and justify what you’ve said or done in any way’. That’s how I felt at the time. That’s why I had that reaction.

Do you feel like – both at the time and since – that it was handled right from a production standpoint? Because Michael [Lorimer] is trying to insinuate otherwise. But watching it, it felt really responsible to me.

Listen, at the end of the day, production has been amazing. After filming, they’ve got to crunch the whole thing down to 40 minutes. They have a bloody hard job. They weren’t even filming when it happened. So that was even harder for them to try and pick up. I think production have been amazing, they’ve been supportive. And you know what, they’ve been trying to make Julia look bloody brilliant. So I can’t see how he can turn around and try and say they’ve been unfair.

On the show, in real-time, and later during that incredible dinner you guys had at Euro, Julia just seems like she’s not sorry for the incident so much as she’s sorry that it happened to her. When she says “No one else would have reacted that way”!

What a silly thing to say! But that’s Julia – she comes up with the most bizarre things. And to say that; well, honey, they were never called n*****. But that’s Julia for you. And that’s why they have a wonderful cast.

It’s hard – I don’t mind people dishing it out to me. I can take it. I won’t play the victim, I’m not interested in playing the victim. However, if it’s something that someone cannot change about themselves, keep your mouth shut. If it is something someone can change about themselves, it’s fair game. But if it’s something you can’t change – if you’re disabled, if you’re of a different ethnicity, you can’t change that. So don’t throw the knife. I think it’s an unfair game to play. It’s just not right to go there.

It seems like a trauma, like a shock. And then you kind of process it a bit more. In the aftermath, were you concerned about how it might be put together, or how it might be received. Like, there’s a particular climate out there right now. From Julia’s perspective, I don’t think she has any idea what’s going to happen.

You’ve got time to think! Most times I’d sit there and say nothing. Because I’d be thinking hard about what I want to come out of my mouth. If someone’s winding me up the wrong way, I would think about what I was going to say, and how it was likely to be perceived. I don’t know how people will perceive me. You’ve watched it, I don’t know your opinion of it. I just hope people who watch it realise that using that term is not acceptable. It’s not a cool term to use. And I don’t want people to think that.

That’s Us is a campaign by the Human Rights Commission that asks Kiwis to start sharing their personal stories about racism, intolerance and hatred, as well as their hopes for the future of New Zealand as one of the most diverse countries in the world. The NZ Attitudes and Values Survey, as well as the Human Rights Commission own complaints data shows we need to start talking openly about racism, intolerance and hatred. That’s Us is about the kind of people we want to be, as well as the kind of country we want our kids growing up in. Read more stories at thatsus.co.nz and tell your story. 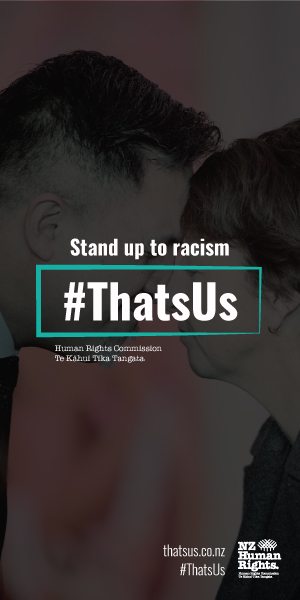