After Covid devastated its 2020, Basement Theatre comes roaring into 2021 with its Summer Season. Here’s the rundown of shows in-store, with some comments from programmer Nisha Madhan.

What is it: Jump into the hilariously awkward world of reality TV (and creating truly awful British alter-egos), in a parody of the popular show, Love Island. Each show will take place on the “set” of Lust Island, where young, sexy, fame-thirsty contestants battle it out to be the hottest couple on the island. To avoid elimination the audience will vote live to keep their favourite contestants in the running.

What Nisha says: “Our first act of self-care was to programme a work that felt like diving into a fresh pool of water, with Lust Island, the runaway Love Island take-off by Brynley Stent with her army of badass boss bitches, the Heartthrobs. Because sometimes self-care looks like a ridiculous binge on reality television and then taking the absolute piss out of it with the funniest women in Auckland City.” Melody Rachel in I Wanna Be Mark Wahlberg. (Photo: Supplied)

Who’s involved: Non-binary BIPOC (Māori/Samoan) poet, performance artist and Cypris Afakasi and multidisciplinary artist and Arts Laureate Moe Laga, who are both founding members of arts collective Coven and the House of Coven-Carangi.

What is it: HEtheyShe is a solo performance art, activation dance experience – a projection mapping of the world unseen, a soundscape of the disillusionment that manifests in our subconscious, self-painted by the dancing body to challenge the limitations of our tunnel-visioned collective understanding of gender.

What Nisha says: “I’m a strong believer that artists do an important and specific job. They process the world around them in real-time and space through intention and action. They use ritual to weave spells that need witnesses, audiences like, to activate its charm.  At the Basement, that service involves the undoing of the dominant colonial-patriarchal regime, by taking up space with unapologetic bodies and give-no-fucks voices. If there is one work this summer that embodies this idea deeply it has to be HEtheyShe.”

I Wanna Be Mark Wahlberg

What Nisha says: “Melody Rachel is our Basement darling this Pride, presenting a curated line up of queer artists throwing out ideas like spaghetti at a wall in Scratch Fest and performing her full-length solo rampage on gender norms in I Wanna Be Mark Wahlberg.” 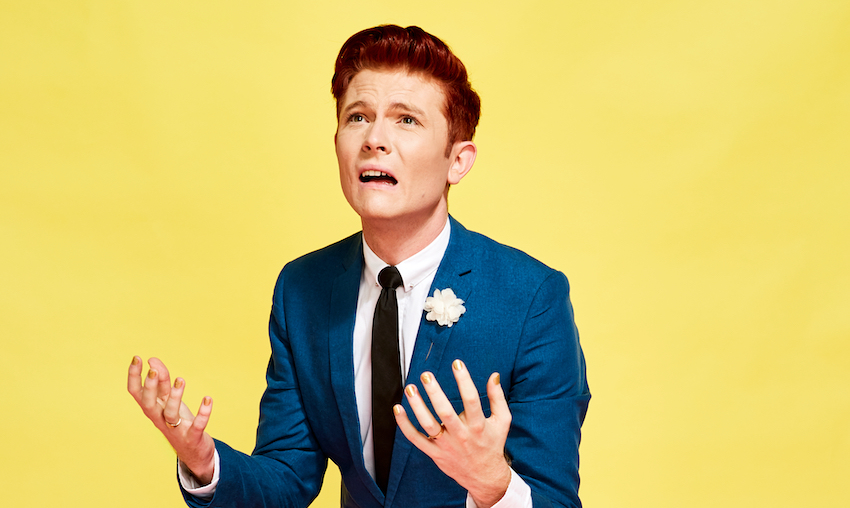 What Nisha says about Fringe: “Fringe is my favourite time of the year. I’m notorious for trying to see every show and developing an inappropriate crush on the wrong person, so watch out!  I blame the heady mix of risk and creativity that spills out during the festival. This year it’s on for three weeks, so don’t be surprised if I develop several inappropriate crushes!”

What is it: An evocative coming-of-age story that emulates beat poetry delivered through physical grace. Growing up in New Zealand as a Samoan New Zealander, the insights are both personal and reflective of cultural challenges faced by those who are navigating identity as a minority race in Aotearoa New Zealand. Waiting is an honest and raw look at how life can take us on twists and turns and will leave you musing your own life story, sparking reflection on moments lost, relationships built, and decisions made.

Who’s involved: Australian comedian Rhys Nicholson, whose special you can watch on Netflix.

What is it? In Nicholson’s own words: “Hey there. It’s me, Rhys, from comedy. I’m escaping the roaring dumpster fire of my own country to nestle in the sweet bosom of this paradise they call New Zealand. And do some comedy.”

Let Them Eat Cake/Soliloquy in Sweat

What is it: Let Them Eat Cake, by Faasu Afoa Purcell, examines the contradictory and ever-evolving idea of self and identity, while Soliloquy in Sweat offers audience members coupons to various services – cooking, cleaning, and babysitting – should the performer, Katrina Elizabeth, fail to fulfil her promise to collect half a litre of sweat within 30 minutes by performing a series of high-intensity exercises and movement phrases.

What is it: “A show about life. Performed by a ghost. For the love of god.” GHOST MACHINE (spelled all caps, pronounced shouted) is an existential crisis played out live, performed by a woman entirely inside a duvet cover.

Back To Square One

What is it: Back to Square One is a site-specific show made for driveways, featuring a 95-year-old Danish great-grandmother, the stories of local Sunnyvale residents, lots of chalk and maybe even coffee and cake.

Who’s involved: The show is created by Karin McCracken and Meg Rollandi with Arlo Gibson, performed by McCracken and Gibson, and directed by Julia Croft. Sound design and composition comes courtesy of Oliver Devlin.

What is it? Standard Acts is a new experimental theatre show that explores the nature of power and its effect on our lives. Two performers test dominance, competition and submission in an electric dissection of power in partnership. It’s also the first Basement Co-Pro, a new model the Basement is adopting that supports selected shows, putting artist care and sustainability at the centre of the process. Each show under this model receives a presentation grant, subsidy and contra support, an assistant producer and is significantly underwritten by the venue.

What is it: In the artists’ words: “A supermarket sponge cake and one hour to eat it. A delectable, riotous, naughty rampage. A search for freedom. An invitation to indulge. A blatant rejection of the rules. Thrashing about on the ground in cake. Fat freedom / complete control / party for one. Cake Baby.” The poster image for An Extraordinary Meeting. (Photo: Supplied)

What Nisha says: “A treasured part of our programme is our annual Fringe provocation, designed to stir up the creative juices of our artist community.  Over the years, our artists have created performance salons, seasons of 1:1 works built for just one audience member at a time, politically charged manifestos, and a suite of four hour-long durational performances for audiences to come and go from. For 2021, we asked the question: what if everybody was an artist? Or thought of as an expert? Every day, people make a tonne of creative decisions and navigate their worlds with imagination. They empathise with others around them, sing arias in the shower, and say things even the most qualified of writers couldn’t make up”

you are [not] alone here

Who’s involved: This show is written and directed by Amy Mansfield, performed by Mika Austin, conducted by Nolwenn Lacire, produced by Anna Groot and designed by Gareth Blackler.

What is it? Is this REALLY LIVING? Are we REALLY IN CONTROL? Or are we just jumping from one device to another, acting on the commands of an AI-generated algorithm that has other plans for us entirely. A brand new show by the makers of sell-out verbatim shows This Is What You Signed Up For and I Didn’t Invite You Here to Lecture Me, you are [not] alone here looks at our everyday lives and how somewhere along the way, we might have lost track of ourselves.

Out of the Mouths of Babes

Who’s involved: Out of the Mouths of Babes is a family affair, with the three performers covering three generations: Tessa Mitchell, Sian (Tessa’s daughter) and Judy (Tessa’s mother). Direction comes courtesy of Ruth Dudding and design from Sean Curham.

What is it: Tessa Mitchell speaks of being a mother, daughter and actor in the year of Covid. Joined by her mother and daughter, they connect pivotal moments in their lives in a tapestry of dance, spoken word and music, that celebrate the choices that define us.

Who’s involved: Academics and theatre-makers Alexandra Bonham and Gayatri Adi are behind this interactive theatre show.

What is it: The show comes out of the creator’s academic research through the University of Auckland, and is an interactive social experiment where audience members act as council members to decide on the future of our Super City. The brief? “The Urban Growth Agenda is government policy, but how does a city grow? Replace houses with high rise blocks or let the city sprawl? Experts alive and dead will argue how cities work – but for whom and for what? You must form a council and, together, decide our future.” What is it: Marcie was four months old when her twin sister died; 30 years later she spends time alone with a hodgepodge of second-hand memories, old documents and the ever-present twinkling of unfamiliar grief.

Who’s involved: Tuatara Collective, led by Jason Te Mete and Tawera Ormsby, who has been responsible for the continued education of the students at PIPA and MIT’s discontinued performing arts papers.

What is it: HAU [te hī o te haā] is the final offering from Tuatara Collective as the Basement’s 2020 Company in Residence, and will present the solo works of the collective in a festival of everything that Tuatara does best: song, dance, story, and Brown excellence.

Who’s involved: Created and performed by Sarita So, produced by Ahi Karunaharan and directed by Natano Keni

What is it: A poignantly warped and sometimes silly journey through history and memory, Sarita So’s Digging to Cambodia is a letter to her past, present and future self. Featuring Cambodian karaoke pop from the 1960s, dance and storytelling, Sarita examines her relationship to Cambodia from her perspective as a New Zealand-born Cambodian.

What is it: The Monotone Era is a double bill featuring the works, Subclinical and 0essiah. It takes a look into two communities as they deal with their intrigues and each other. You may see yourself, you may see someone you know. Their lives are yours if you’ll let them be.

Change Your Own Life

What is it: Change Your Life is about thriving and surviving through grief, happenstance and self-sabotage. Grab your crystals, light some candles and get ready to open your chakras, or at least laugh about sad things.

What is it: After two sell-out seasons, Prayas Theatre and Agaram Productions return with subversive South Asian anthology show, with new writing, performances, and experiences from our next-gen of creatives.

The Downs and Ups of Peep and Squeak

Who’s involved: Devised and performed by Katie Longbottom and Ravi Gurunathan, and directed by Sarah Gallagher. Their other collaborators include Nati Pereira, Brayden Jeffrey, Zane Allen and Jazmin Whittall.

What is it: Two siblings have their world turned upside down when their parents are mysteriously murdered by an elusive monster. The pair decide to set off on the adventure of a lifetime as they heal and grow through the sharing of new experiences. They plunge themselves headfirst into a kaleidoscope of unfamiliar, magic lands, meeting a fantastical array of friends and foes.

You can check out the entire Basement Theatre summer season (and grab your tickets!) via their website here, and keep up to date with them on Facebook here.

This content was created in partnership with Basement Theatre.